Art Nouveau appeared as a remonstration against run-of-the-mill ornaments used on many town houses of the time. It was characterised by a lack of symmetry, and ornamentation replete with foliage motifs - flowers and leaves composed into heterogeneous and intricate arrangements. Art Nouveau art was also manifest in balustrades, portals, stained-glass windows and polychromes. Poznań's Art Nouveau architecture reveals influences of Berlin's Jugendstil milieu.

Most of Poznań's Art Nouveau town houses appeared at the dawn of the 20thCentury. At the end of the 19th Century the Prussian city authorities decided to expand the city westwards and began to design a new street grid in the incorporated boroughs, which provided an area of operation for Poznań's architects. With the demolition of the fortifications around the city centre, the provisions of the building code were altered so as to allow the construction of permanent buildings on the former outskirts of the fort.

Our trip begins in the borough of Jeżyce, on Roosevelta Street. At Nos. 4-7 there is atown-house residence complex designed for the German Magistrates' Housing Association by a company of architects, Hermann Böhmer and Paul Preul. Forged grating at No. 5 Roosevelta Street and a supernaturally-large bas-relief of a nude woman supporting the balcony on the facade of the building at No. 4 are the most distinctive features. Parcels of land owned by the housing cooperative were developed with separate buildings that housed more modest flats with stairways that were often ornamented with stained-glass windows. Examples of these are town houses at Nos.3A and 4A Zacisze Street.

We approach the junction with Dąbrowskiego Street and turn right into this street. Having walked a couple of steps, we pass 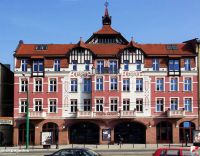 the Tadeusz Łomnicki New Theatre (Teatr Nowy), built in 1906, also designed by Böhmer and Preul. The design of the facade alludes to the Jugendstil characteristics of the German-speaking areas with geometrised forms in a variety of colours and textures.

We proceed on to the junction with Mickiewicza Street, and then turn left. On both sides of the street there are examples of other Art Nouveau town-house residences that were once surrounded  by front gardens, built for wealthy tenants. Asymmetric building façades were enhanced with balconies and bay windows. The Art Nouveau ornamentation is concentrated round vertical rows of windows and at the gables.

We reach the junction with Słowackiego Street and turn right. This street is lined with town-house residences up to the junction with Kochanowskiego Street, and from that point with a series of town houses. Particular attention needs to be devoted to thetown house at No. 20, which was handed over to the University of Poznań after World War I and the town house at No. 22 which currently houses the Poznań Jeżyce Tax Office and the Poznań City Hall, both of the buildings designed by the Lindner & Roskam company. In a further part of the street it is worthwhile paying special attention to the town house at No. 34, which was designed before 1906 by Paul Pitt for Jan Kosicki, a bank director. We reach Prusa Street and turn right into it only to take a turning left after a while into the historic town square, Rynek Jeżycki. A regular market square, built shortly after the Jeżyce borough had been incorporated to the city, was rapidly developed with impressive town houses. The most interesting of these are four houses combined into one composition - erected in 1904 at the southern frontage of the market square for K. Wendland, a wine merchant. In particular, it is worthwhile taking a look at the town house at No. 1 on the corner of Kraszewskiego Street, into which we are going to turn.

The street is lined with a tight row of town houses. We walk up to the sumptuous town house at No. 19 and then turn right into Jackowskiego Street. We walk in the direction of the town house at No. 25, designed by Paul Pitt, which today has a still-impressive, albeit worn-out, abundant stucco decoration. Continuing our passage towards No. 39 we can see a splendid house owned by Oskar Hoffman whose workshop and flat were on the ground floor.

Going back to the junction with Kraszewskiego Street we turn right. We pass Bukowska Street and go straight on along Szylinga Street and reach Grunwaldzka Street. Now we are facing a magnificent town house at No. 20a, designed by Paul Pitt for his co-partner Bolesław Richelieu, one of Poznań's stucco artists, in whose workshop unusual façade ornaments were made, replete with creatures of fancy. We proceed straight into Matejki Street, which has been charted as one of the main axes for the new western part of the city, intended for luxury dwellings.

On our left we pass town houses at numbers 3-7 designed by P. Pitt, and opposite there is town house No. 67 whose spectacular facade can easily compete with them. This house was owned by Anton Künzel, a designer who placed the attributes of his profession on the cartouche at the facade - a plummet, a steel square and a compass.

We approach the so-called Johow - Gelände, a housing estate implemented according to an urban planning scheme by Max Johow, one of Poznań's most prominent architects of the early 20th Century. The town houses - arranged in a compact residential development, without annexes - had front gardens, and, in addition to the high standard of the flats, dazzled with the elaborately-ornamented vestibules and diverse  facades of the buildings.

On the right side of the street we pass town houses at numbers 61-58, 55 and 54 designed by Emil Asmus, who also designed most of the other town houses in this area. These town houses feature sublime façade ornamentation, impressive portals and emphasised window frames. Other designs by Asmus can be seen on the adjacent streets - Chełmońskiego and Grottgera. The town house at No. 56, designed by Max Biele, although part of its façade has been destroyed, strikes you with one of the most magnificent portals and entrance doors in the housing estate. The front of the town house at No. 51, clearly inspired by the Vienna Secession, differs from the remaining housing estate buildings. 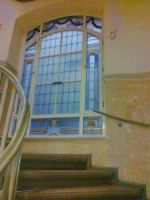 e corner town house at No. 50, owned by Max Johow, built in 1906, currently houses the Business Activity Department of the Poznań City Hall. It is worth entering it to admire its stained-glass windows and its vestibule, adorned with reliefs and busts. We turn right into Wyspiańskiego Street. Here we should take a close look at the town house at No. 10, with an almost-intact vestibule, with stained glass windows and Art Nouveau chandeliers. We turn right into Chełmońskiego Street. AtNo. 22 there is a town house which was designed and owned by Karl Roskam, with stucco ornaments made by Artur Wagner.

We go back to Wyspiańskiego Street, cross the triangular square and proceed down Matejki Street. On our right there are the last specimens of Art Nouveau on our route. The most interesting of these are the town houses at No. 47 designed by P. Pitt and at No. 46 by an unknown designer. The town house at No. 46 ornamented by the already-mentioned Boleslaw Richelieu attracts our attention with its balconies and impressive loggia bars, with an entrance guarded by a fabulous dragon.

Examples of Art Nouveau off the route:

In other parts of the city - both in the old centre and in the areas of Wilda and Łazarz incorporated into Poznań in 1900 - forms of Art Nouveau ornamentation appeared only on a few of the newly erected houses. Examples can be spotted, among other places, at 69 Św. Marcin, 52 Garbary, 19 Szewska, 31 Żydowska, 1 Szyperska, 5 Szkolna, and on Kilińskiego and Maleckiego Streets.

One of the gems of Poznań's Art Nouveau, designed by Oskar Hoffmann. This five-storey town house situated at the extension of Gwarna Street with its monumental symmetric facade decorated with sandstone details and forged elements of balcony balustrade stands out through the perfection of its workmanship and high artistic value.