Biking through the green Poznań

The summer holiday season is the perfect moment to spend time actively. An excellent way to make use of the summer days is organizing a bike trip. Poznań is one of Poland’s greenest metropolitan areas, and is therefore a dream destination for a bicycle ride. A well-developed bike path network and at least a few possibilities to rent a two-wheeler are among Poznań’s additional amenities.

The easiest way of renting a bike is doing this by Poznanski Rower Miejski (PRM) system. In Poznan there are 113 PRM’s stations availables for users (including four so-called sponsorship, financed by business partners), almost 1000 rental bicycles - 3rd generation bikes (3G) and 40 the so-called zones of hiring 4G with 562 bicycles. Although a prior online registration is mandatory, it is worth remembering that the first 20 minutes of bike usage is free of charge.
All current informations about stations, prices, logging are accessible HERE

Bikes’ owners can easly leave them on bicycle’s parking, which are situated beside Shopping Moles ( which in mostly cases are monitored ), on Main Railway Station and alongside buffors’ parkings: 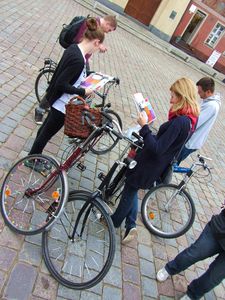 When you already have your own or rented bike, all that is left is to make the choice of the route. The bike paths which enable close contact with nature are among the most popular routes. One of the most attractive city biking paths leads around the Malta Lake. Also by Malta Lake there is the Poznań Bicycle Hub (Poznański Węzeł Rowerowy), where as many as nine bicycle paths start or cross.

While cycling through Poznań it is worth visitin Wartostrada, which is walking and biking route along Warta River. On its way you can see the Ctahedral Island or Porta Posnania.

The Poznań Citadel is an equally popular biking destination. The city’s most impressive park is also the remains of Europe’s biggest 19th century fortresses. It is an ideal place for a not too strenuous cycle amongst the green, the sculptures and the mysterious remains of old strongholds.

Cyclists interested in longer routes will find the one along the Warta river to their liking. The path leads through Dębina - an over 260-acre forest in the southern part of the city. A cycle along the picturesque banks of the Warta river will take you as far as Puszczykowo, where you can visit the Arkady Fiedler Museum or try the ice-cream next to the railway station in Puszczykówko - a delicacy favored among all Poznań natives. This route is about 20 kilometers long, starting from the center of Poznań.

In search for the most interesting biking routes, one cannot forget about Puszcza Zielonka (Zielonka Forest), located north of Poznań. The spacious forest wilderness can be covered on a bicycle in the length and breadth, and also around. It is best to follow the route of the wooden churches around Zielonka Forest.

The most persistent cyclists can cover the Cycling Ring Around Poznań (Pierścień Rowerowy Dookoła Poznania) which is 173 kilometers long and forms a loop around the city. It is a great excuse to visit the nearby town of Kórnik with its famous castle, or the neighboring town of Murowana Goślina.

Very helpful may be the free map of bicycle routs in Poznań. One can get it in the Tourist Information offices at the Main Train Station and The Old Market Square or PDF version below.