Rogal Świętomarciński (St Martin’s Croissant) is one of the most recognizable and undoubtedly tastiest symbols of Poznań. During the upcoming Independence Day celebrations on November 11th, combined with the names-day of Święty Marcin Street (St. Martin’s), nearly a million of the crescent-shaped, poppy-seed filled pastries will be eaten. Their unique taste is beyond words, but we can tell you all about their fascinating history, which is longer than you’d expect, their bold presence in cyberspace and, last but not least, about their true uniqueness as well as  the need for the protection of their traditional production process.

The Rogal is older than it seems 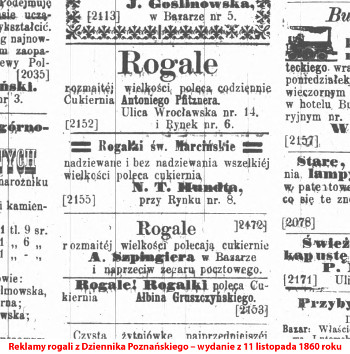 St Martin from Tours was a Roman legionary, who shared his coat with a beggar in the coldest of winters, and thus became a symbol of mercifulness. This story was a common one to be told during November sermons in Poznań’s many churches, on the St Martin’s remembrance day. Supposedly during one of these sermons, in 1891, father Jan Lewicki called upon his flock to support the poor. The call was heard among others by a pastry maker, Józef Melzer. He decided to bake, and give away to the poor, a few trays of specially made, crescent shaped pastries with a poppy-seed filling. Other bakers picked up on the idea and so the tradition of Rogal Świętomarciński was born… or at least, so it was according to the most famous version of the story. Was it really the case? Not entirely. We now know there were ads for such pastries in the local newspapers long before the events of 1891 - even as far back as the 50’s and 60’s of the 19th century.

The Rogal in cyberspace

Although today the rogal is available for purchase all year round, the height of the sweet season falls on November 11th. According to tradition, it is then that these pastries taste best, and are sold in largest amounts. During the St Martin’s celebration - the names-day of Poznań’s most famous street, Święty Marcin, named after the Roman legionary - Poznań’s bakeries and pastry shops sell as much as a few hundred tonnes of this delicacy.

For a good few years now, the Rogal Świętomarciński is also available for online orders and purchase. Poznań natives can send parcels with the sweet contents to their friends abroad, or enjoy the taste of a rogal themselves, if they are away from home and feel a twinge of nostalgia. What is interesting, is that other parts of Poland have tried to pirate the typical Poznań delicacy and have come up with counterfeits and imitations. Which is why...

The Rogal under special protection

This is why the origin of Rogal Świętomarciński is so vital. The tastiest crescent-shaped pastries are of course only the authentic ones, which come exclusively from Poznań and the Wielkopolska region. Their uniqueness has been officially recognized and in 2008 Rogal Świętomarciński has become a regional product under the protection of the European Union. The Poznań Pastry Chefs and Bakers Guild carries out a yearly quality certification of rogal and only those which fulfill these strict requirements are worthy of carrying the Rogal Świętomarciński name. In 2012 this right, and honourable privilege, went to 98 bakeries and pastry shops all over the Wielkopolska region.

How to prepare a proper Rogal Świętomarciński? See for yourself!