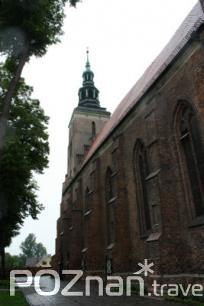 Church of the Assumption of the Blessed Virgin Mary in Śrem

The mighty silhouette of the Gothic Parish Church with its tall tower dominates the panorama of the town. The compact building of the church is adjoined from the west by a 62-metre tower topped with an early-Baroque dome. Late-Gothic tiered church gables, decorated with pinnacles, panels and open-work, have been preserved. On the outside, the church is wrapped with multi-tiered buttresses.

The construction date of the church is unknown. Presumably, its erection was started immediately after the second granting of a charter to Śrem in 1393; the first record of the church in 1421 mentions the foundation of one of its altars. Originally, the church had no tower, which was added towards the end of the 16th century. The most valuable element of the interior décor is a late-Renaissance painting, apparently made by Andrzej Stuss around 1620, titled Adoration of the Virgin Mary by Saint Adalbert and Saint Stanislaus. The main altar was built in 1892 using late-Baroque sculptures of St. Peter and St. Paul. Its centre is occupied by a copy of an original painting by Titian called the Assumption of the Virgin from the Church of Santa Maria Gloriosa dei Frari in Venice.
Near the church wall stands a Baroque stone figure of Saint John of Nepomuk of 1734.

ADD TO TRIP
Church of the Assumption of the Blessed Virgin Mary in Śrem
ul. Farna 9
Śrem