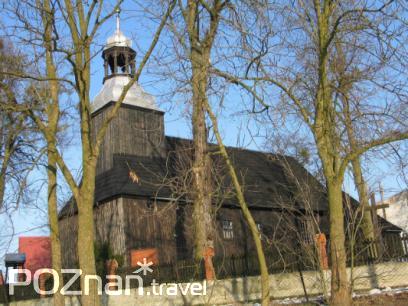 Complex of the parish church in Długa Goślina

A single-nave, wooden church from 1623 with a bit narrower chancel. The interior is dated for the 17th and 18th centuries. Next to the church there is a wooden bell tower from the beginning of the 20th century and a half-timbered presbytery from the 19th century. The summer music festivals, "Musica sacra – musica profana" are organized in the church.

A parish in Murowana Goślina was set up in the late 14th century. It was funded by the contemporary owners of the village, knights of the Nałęczów family line. They also built the first church in the parish. The extant wooden chapel located on the former site of the church was built only around 1623s. Its design was often found in the early wooden blockconstruction churches in the medieval Wielkopolska. The roof, which covers the whole church, protrudes along a narrower choir built in a rectangular plan, forming wide characteristic eaves. In the 18th century a tower with a baroque helm roof was added.
The works of art found inside the church date back to the 17th and 18th century. At that time the village was owned by the Benedictine nunnery. When a plague spread in Poznań then, the nuns frequently found shelter in Goślina. The Benedictine piety is reflected in the 17th century baroque sculptures of Mournful Christ and St. Benedict located in side altars as well as in the canvas of St. Benedict in Hermitage in Subiaco. The canvas of St. Mary Magdalene in the high altar was
funded by the heiress of the local manor as a votive offering in gratitude for the independence Poland regained in 1918.