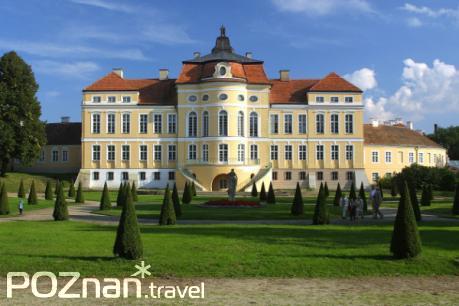 A better place to get the spirit of great aristocracy than the palace and park in Rogalin is really hard to find. The interiors of this late-baroque-classicist residence host a museum, focused on the history of the Raczyński aristocratic family.

The family used to left their mark on the Polish history. The exhibition also includes a coach house and Painting Gallery, featuring artworks of Jan Matejko and Jacek Malczewski, who belong to the most famous Polish painters of the second half of the 19th century.

A must-see supplement to the trip is a walk down the palace part, with one of Europe’s largest oak groups. Many of the nearly 1500 trees are several hundred years old. The most famous three, however, of amazing circumferences, are those named after the legendary Slavic brothers. Those are Lech (7.3 m) and Czech (6.7 m) and Rus (9 m).

One may be surprised to find a Roman shrine amongst the greenery. The building is obviously not that old – the stylized church of St Marcelin, build in 1820, is one of Edward Raczyński’s creations. The last of the family - Edward Bernard Raczyński, the last Polish President-in-Exile – was buried here in 1993.

The number of tickets for the day is limited, which could mean the impossibility to enter the palace ticket "Museum for 1 zł" (pupils and students 7 - 26 years), free admission on Wednesdays.