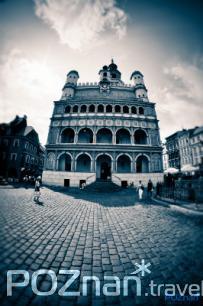 Since 1954, the Poznan Historical Museum has been located in the Town Hall, the old seat of the City Authorities. Originally built as a small one-story structure, the building dates back to the turn of the 13th century. In mid-16th century, the City Authorities entrusted its conversion to the Italian Architect Jan Baptista Quadro of Lugano who, between 1550 and 1560, turned this modest Gothic Town Hall into an impressive seat of City Authorities.

[DUE TO THE RENOVATION CLOSED UNTIL FURTHER NOTICE]

Despite substantial damage during World War II, the Town Hall has retained its Renaissance style of the mid-16th century. The Grand Vestibule, the Royal Room and the Court Room on the building's first floor comprise space designed to receive prominent guests. The Grand Vestibule (also known as the Renaissance Hall) is famous for its beautiful stucco

ceiling ornamentation. The holdings of the Poznan Historical Museum comprise approximately 12,000 items documenting the town's history from the Middle Ages to the present day. On display on the ground, first and second floors, the exhibitions on the history of Poznan from the 17th century to 1945 feature valuable documents and works of artistic crafts. Some of the most precious items include an 18th century gold-plated and enameled pastoral staff from Limoges, a 1575 tabletop clock bearing the Poznan coat-of-arms made to the order of the City Authorities by the local clockmaker Jan Stall and a 1651 shoemaker guild glass.

Equally remarkable are two 1790 and 1792 globes of the sky and the Earth to be found in the first floor Court Room. These maps of the Earth and the sky have been impressed off twelve plates using the copperplating technique. The globe of the Earth is of additional historical value as it shows three routes around the world (including the dates) that were taken by Captain James Cook (1728-1779), one of the best known travelers and explorers in history.