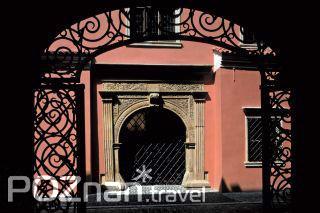 The Górka Palace - this municipal residence of great splendour that belonged to a prominent Wielkopolskan family was erected in the years 1544-48, replacing old Gothic burgher houses. Built for Andrzej Górka of the Łodzia coat of arms, the governor of Wielkopolska, the rectangular palace consisted of two buildings connected through a gate wing in Klasztorna Street.