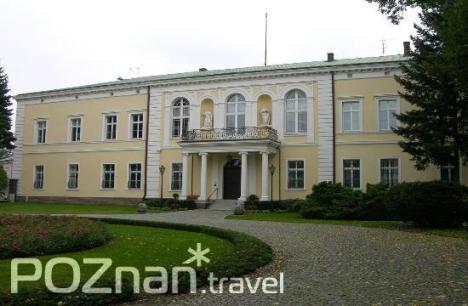 Archbishop Palace and the buildings on the island of Ostrów Tumski

The earliest mention of the residence of Poznań's archbishops is from 1404 though a bishop's palace must have existed there already when the cathedral was built. The palace suffered extensive damage during various wars and floods and was rebuilt several times (among others, by Giovanni Battista Quadro in the 16th century and Pompeo Ferrari in the 18th century).

The present building is a three-wing edifice in a mixture of styles. The main west wing of the palace owes its Neoclassical appearance to the extensive reconstruction undertaken by Juliusz Salkowski in the years 1852-1854 and modified by Karl Heinrich Schinkel. The entrance into the building leads through a balcony portico with Ionic columns. The two marble figures of St. Peter and St. Paul were sculpted by Oskar Sosnowski; until 1945 they adorned the main altar of the cathedral. The north wing was erected on the remains of walls from the 15th and 16th centuries; it features a Neoclassical gate with a large two-column portico.

The late-Baroque statue of St. John Nepomuk from around 1730, is standing in front of the palace.. Located on the west side of the square is the building of the Metropolitan Curia, erected in 1834 to a design by a builder named Traeger. Parallel to it but farther to the west is the building of the cathedral rectory in a mixture of Baroque and Neoclassical styles erected on the old foundations in 1792 and rebuilt in 1859. Two stone plaques from 1598 and 1715 mounted on the north wall bear inscriptions pertaining to the history of the rectory. The bust in the tympanum of the façade presumably depicts Jan Kochanowski who held the post of titular curate of the Poznań Chapter in the years 1564-74.

The statue of Pope John Paul II (designed by Krystyna Fałdyga-Solska, 2000) stands in the square. The spiritual leader of the Roman Catholic Church visited Poznań twice, in 1983 and 1997.

Standing next to it is an interesting building called the Psalm-Singers' House. In old times twelve priests sang the Book of Psalms in the cathedral throughout the entire twenty four hours of the day. Bishop Jan Lubrański built this house for them. Worthy of notice are the ogee-arched blind windows in the north gable of the edifice.

The island of Ostrów Tumski also features 9 nine canonries and 3 vicarages where canons used to live.  The 18th century vicarage at 7 Posadzego Street from the features an interesting  historic Polish-style shingled roof.