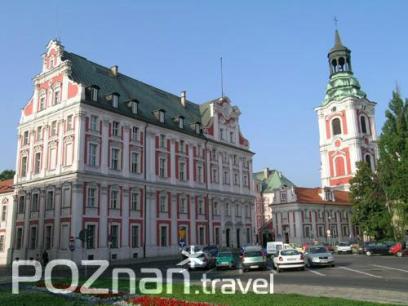 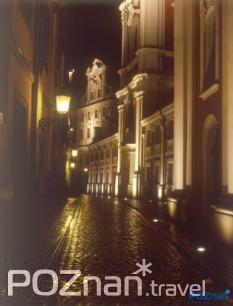 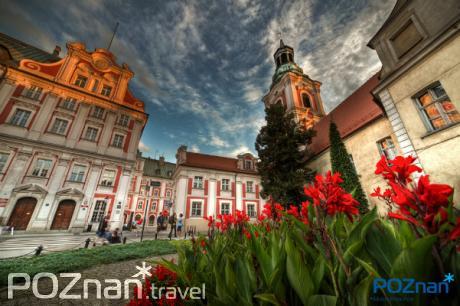 This four-storey U-shaped building with a spacious courtyard and a two-wing cloister was erected in the first half of the eighteenth century. At present it is the seat of the municipal authorities. In 1806, Napoleon himself stayed there for three weeks. It was then that a German chronicler wrote that Poznań was the capital of the world. This stunning building has also seen concerts by Fryderyk Chopin.

The Jesuits came to Poznań in the 16th century and built a monastery, a church and a school (college) whose first rector was Reverend Jakub Wujek - the author of the first Polish translation of the Bible. The college opened in 1573 and sustained high standards of education but never achieved the status of a university due to strong opposition from the Cracovian Academy. The Jesuits had a large library, a private publishing house (from 1677) and a school theatre. The order was suppressed in 1773 but the school did not cease to exist; it continued as the Wielkopolska Academy from 1780 and as the Poznań Department School (from 1793). The building, which now houses the City Council, served different purposes. In autumn 1805 the Russian tsar Alexander I made a stopover there and a year later the Emperor Napoleon Bonaparte stayed in the college for almost three weeks. In the years 1815-1830 it was the residence of Count Antoni Radziwiłł, governor of the Grand Duchy of Poznań (most probably Frederic Chopin performed for him in 1828). Today, concerts are held in the White Room which is adorned with Frederic Chopin's bust (a work by Marcin Rożek).

The Society of Jesus started its educational activities in a former hospital building but it soon proved too small. The construction of a new school edifice was commenced in 1701 by an Italian architect Giovanni Catenazzi but the project was put on ice for the duration of the Great Northern War. The work was resumed in 1719 by a Jesuit builder Jan Zelner and a designer Franciszek Koźmiński. The main wing of the building is in the south, the side wings flank a trapezoid yard that in the years 1748-1752 was closed from the north by a one-storey building with a gate surmounted by a tower. In the nineteenth century, two low towers with stairwells were built and a risalit containing monumental stairs leading onto the first floor was added. The building facing Za Bramką Street was built in the early twentieth century. The monumental four-storey edifice is covered with a pitched roof and features uniform Baroque and late-Baroque façade decorations. It was extensively refurbished both on the outside and inside in the years 1995-1998.

On the opposite side of Gołębia Street lies the Baroque building of the former Jesuit School erected in the mid-eighteenth century that now houses the State Ballet School. The arcaded yard is used for summer concerts and performances. Two commemorative plaques marked the place where the first professional theatre in Poznań was opened by Wojciech Bogusławski (1783) and where the oldest local school, St. Mary Magdalene Grammar School, was established (the plaques were taken down during recent restoration work).