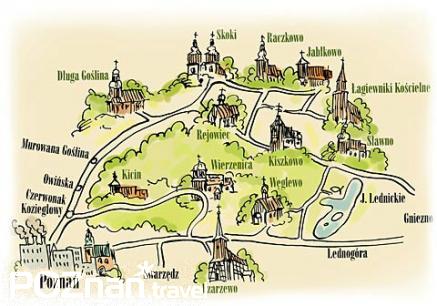 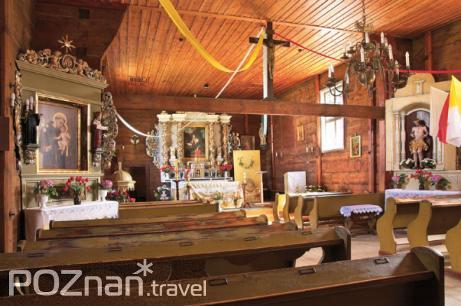 This book presents 12 fascinating countryside churches. Each of them has its unique history and an interesting present. Almost all the parishes were set up in medieval times, and funded by knights, counts or priests. The extant churches were erected between the 16th and 19th centuries. In almost each temple we can find artworks dating from the gothic period, through the baroque period, into modern times. Each brings memories of important figures, events or legends.

The most mysterious legend tells a story about a transfer of a miraculous image of Our Lady from the palace chapel of Boleslaus the Brave in Lednica to
a church in Węglewo. The chapel of St. Rosaline in Sławno was located on the top of the ruins of an old settlement in a remote forest. Jan Kochanowski, a renowned Polish Renaissance poet, was a nominal parish priest of a church in Kicin. This post provided him some income when he was working on the translation of the Book of Psalms. Today, Kinin is famous for an Easter mystery play of the Passion of Christ and his resurrection. Benedictine nuns inhabited
temporarily a place near a church in Długa Goślina during a great plague, donaing a number of interesting art works to the church. A church in Rejowiec (a former Protestant church) was funded by a grandson of the poet Mikołaj Rey, Andrzej, who was a politician and a confidential courtier to King Vladislaus IV, who is buried in the parish temple near a neighboring town, Skoki. Kiszkowo houses a miraculous canvas of Our Lady, renowned throughout Wielkopolska. In Raczkowo an old crucifix deserves special attention, while in Jałkowo attention should be paid to an outstanding altar, showing different types of angels. In a church in
Łagiewniki Kościelne, older, more recent and modern paintings form a theological treatise on the Eucharist. Wierzenica was the place where the Romantic Polish poet, Zygmunt Krasińsk, was coming to visit his friend and activist, August Cieszkowski, who left an interesting tombstone in the church – its copy is found in Santa Croce Church in Florence. And, last but not least, in the vault in Uzarzewo church, a few generations of outstanding Polish noblemen from the Żychliński family are buried. Nowadays, their palace, which is opposite the church, houses a museum of hunting.